The article is dedicated to the empirical study of the causes of periodical crises in the Russian economy. It is the continuation of the author’s article "On the Effect of the Russian Ruble Exchange Rate on the Economic Growth Dynamics". The Central Bank of the Russian Federation’s data "Guidelines for the Single State Monetary Policy" over a period 2000-2015 were used for calculations and diagrams. Based upon the Russian macroeconomic statistical data for the period of 1995-2015, the main factors are defined (real effective rate of rouble, oil price, capital account of payment balance, growth rate of controlled prices) that allow to build a crisis development model. The idea of constant contradictions between the money-and-credit and budget policies of the government is suggested as the main cause of crises of 1998, 2008 and 2014. This discrepancy is exemplified by each stage of the Russian economic development (1995-1999, 2000-2008, 2009-2014). A self-sustained crisis model and methods for resolving this issue are suggested.

If one attempted to find out a single diagram depicting the Russian economic policy for the last 20 years, it would probably be the dynamics of real effective course. Like a drop of water, it reflected all the dramatic changes in the country’s economy during this period. 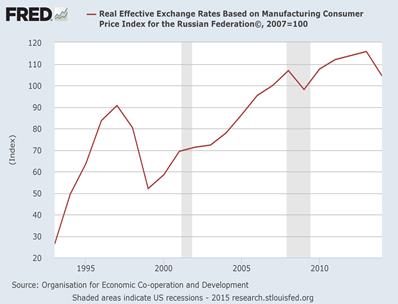 2)   the next period of significant rouble strengthening of 2000–2008 in the conditions of the “expanding currency band was fixed to the currency basket” and extra budget with accumulation of the reserve funds terminated the crisis of 2008;

3)   the period of “adjustable” budget and monetary policies, without a significant rouble strengthening and with moderate deficit ended with the crisis of 2014.

However, independently of any period, the contradiction between budget and monetary policies was obvious, which caused the crisis situation in the end.

This article is dedicated to analysing the essence of this contradiction and possibly the preventing measures in the future.

The main goal of every economy development is its stable growth. If we compare Russian and US growth rates, for the last 20 years (1995–2014) Russian average growth rates was even higher than the one from the USA, but the changeability of GDP dynamics was also much higher.

Figure 2. Real Russian and US GDP

According to the main equation of the monetary theory, considering the growth of emission rate and that all other things remain equal is connected with the growth rate of money supply. Historically, the M2 monetary aggregate have had the greatest explanatory power for Russia as the money supply.

At the same time, the relation between the money supply growth and inflation didn’t have such a visible dependence.

However, a rather obvious dependence is traced between the index of rouble real effective exchange rate and the dynamics of money aggregates change regardless the type of aggregate – whether it’s money base or money supply.

The previous arguments confirm the fact that in Russian conditions, the change in the money supply volumes affects the rates of GDP growth and rouble real effective exchange rate more essentially than inflation rate.

For a more detailed analysis of this correlation, allow us to consider all of three stages separately.

In the history of modern Russia, the first integral option for the targeted monetary policy implementation (1995–1998) was associated with the introduction of the currency band with the same limitations of the current and capital accounts. During that period, the budget policy was extremely weak, the budget deficit reached 20% of expenses and was financed through the issue of the GKO-OFZ (Government Short-Term Commitments-Federal Loan Obligations), as well as other loan types (for instance, tax exempts). In that MP model, NDA were the main source for basic money issue and NIR was remaining unchanged while the currency reserves of the Bank of Russia had been barely growing.

When it comes to monetary policy independence, this period can be defined as monetary targeting submitted with IMF. It was related to the IMF credits, in order to keep the financing budget deficit and the balance of payments, also being accompanied by the approval of the “monetary reform” that determined MP’s quantitative parameters.

Therefore, it’s possible to state that all three limitations of the “Impossible Trinity” were “observed” in the negative spectrum:

As a result, even in the conditions of currency limitations (which, by the way, would very easily be avoided upon capital transactions) the conflict between the managed exchange rate and semi-independent MP – which was based on the emissive budget financing – led to the crisis of 1998. The addition of Russia to the 8th article of the IMF Charter, which relieved the restrictions of the cash flow in the current account, made a contribution as well.

Technically, the contradiction can clearly be seen in the diagram (Fig. 10) – reflecting the extreme growth of rouble in a real effective value during the period of time between 1993 and 1998. This was caused by the high inflation rate (from budget emission) that overran the devaluation rate (from the currency band).

In the course of resolving the crisis that occurred between 1998 and 1999, the decisions were made primarily with an aim at building a more stable budget policy, including refusal from short-term loans, a more balanced approach to the deficit. The significant devaluation of rouble, almost in 5 times, also allowed restoring a major part of Russian exporters’ competitiveness that had been lost due to rather fast rouble strengthening during the previous years.

The post-crisis adaptation period was completed to 2002 and since then, the implementation of the modified option for the rouble strengthening policy began. Inflation became moderate and started to steadily decrease, while the rouble started strengthening in nominal terms. The structure of money base formation of that period can clearly be seen on the diagram. 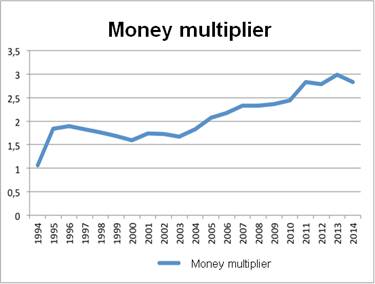 The diagram clearly shows that the main source to create of the money supply in that period was NIR, and NDA performed the “sterilizing” function.

The additional effect was produced by the credit multiplier that was growing at that period.

The increase in prices of petroleum and of the other Russian export items resulted in the improvement of the current account condition and the adequate growth of reserves (2002–2005).

Finally, the total relieve of currency restrictions in Russia in July 2006 resulted in an extreme influx of capital and growth of reserves for the next 2 years. Also, it didn’t hinder from the capital outflow during the next years.

Under the influence of a strong balance of payments and “adjustable” (“basket”+“band”) currency and monetary policies, an abrupt rouble strengthening in real terms took place.

After the 2008 crisis, the current account stopped growing and there was a tendency of the capital outflow to appear, which affected the money supply negatively and caused its increasing slowdown.

Consequently, the GDP growth rate suffered a delay. In 2014 the combination of several important events – rouble rate liberalization, decrease of petroleum prices, introduction the sanctions and the banking system squeeze – that led to that critical situation.

However, the main factor that determined the policy of that period was the budget.

And a separate section is to be focused on that.

The main dependences formed at the beginning of the 2000s, which also remained up to the present time were as described below:

А) “The rule of exporters” was observed, i.e. the petroleum price denominated in roubles had to be growing faster than the inflation rate (plus/minus) dollar strengthening. This rule doesn’t allow the exchange rate to be stable but it does improve the budget revenue.

B) “The rule of state monopoly” was observed, i.e. tariffs on goods and services sold by natural monopolies within the country should grow with the rate higher than inflation. This law doesn’t allow inflation to decrease and deteriorates the expenditure budget.

C) “The rule of state expenditures” was observed, i.e. budget expenditures (the main consumers are social and military expenditures) should grow with the rate higher than inflation.

D) The natural budget limitation of this process was budget deficit. Having suffered a bitter experience in 1998, the government was trying not to build it up and to preserve accumulated non-budgetary funds, such as the Reserve Fund and the National Wealth Fund.

Е) Regarding the growth of the state’s share in the economy and monopolization: by looking at the example of the banking system it’s possible to see the growth of the 5 greatest banks share in bank system assets and the great decrease of the banks share which were outside of the top-50. Also, according to the IMF report dating from May 2014, the share of the governmental sector of the Russian economy exceeded 70% of the GDP.

As a result of the budgetary policy of 2000-2014, based on the previously mentioned rules and the monetary policy described in Section 3, the indices growth rates (A, B, C) gradually diminished and “hit” the inflation growth rate, or, perhaps, came down below that level. This resulted in the 2014 crisis as the potentialities to continue such policy were exhausted.

5. The change of the MP model and its consequences

On the basis of the carried analysis, it’s possible to state that the main non-declared (post-factum) goal of the MP for the period of time between 1995 and 2014 was the strengthening of rouble in real terms. The main instrument in that period was the management of the rouble nominal rate. When the external shock took happened (1998, 2008, 2014), it led to the quick regulation of the accumulated misbalance, thanks to the rapid devaluation of the rouble.

In 2014, there was one attempt to modify the policy, by proceeding to inflation targeting.

The goal of this type of policy is to use interest rates and, indirectly, growth rates of money supply, in order to achieve the target inflation level.

The meaning behind using such approach in the conditions of the current budget policy and the floating rouble rate can be demonstrated with a simple inflation model (Pilnik, 2015):

ExR – the exchange rate of rouble to dollar (basket);

the only way of achieving the inflation decrease (ΔCPI) is to reduce the money growth rates (ΔM2) and increase of interest rates (%).

Therefore, the vicious circle is created (the “self-sustained crisis model”):

- Preservation of the exporter’s and state monopolies rules create the devaluation pressure and the appearance of regulated prices. This results in the maintenance of high inflation.

- To fight the inflation, the Bank of Russia needs to squeeze the money supply and increase the interest rate.

- This means the fall of GDP and generates pressure on the Central Bank, with the goal of decreasing the rate. However, with the high devaluation, the attempt to decrease the rate results in capital outflows.

- In its turn, this gives rise to even greater fall of the money volume and pushes the rate upwards.

By saving the existing model of the budget policy and the floating rouble rate, the use of such policy leads to the fall of GDP growth rates and threat of turn into stagnation.

What options can be suggested to solve this problem?

1.    Changing “the rule of exporters” – exporters “share the profits”. Despite the petroleum price in dollars, its price in roubles should grow below inflation, limiting the exporters’ profitability. This can be achieved by the relevant exchange rate regulation.

2.    Changing the “rule of state monopoly” – monopolies “share the profit”. Indexing of all rates using the “inflation minus” principle.

3.     The Budget expenditures must be indexed at a level which is no higher than the inflation.

5.     The change of the economy structure in favour of the increase of the private section share as the basis for diversification of the revenues and the decrease of the state monopoly’s role.